Now thinking along the lines of my wee company that specializes in Faeries you certainly must be questioning the title of this blog posting? Well, I know I would be, if I was you! Just saying??

Earlier this year I had decided to take a massive leap into the unknown and add to the Northern Line a mermaid like faerie. As this decision took more studying than the rest of the faeries that represent the environment, animals/birds both well known and sacred, using a historical reference and then finally symbolizing the topography of the land and water of northern Canada.

As from this point in the making of the Northern Line I had taken inspiration from the Northwest Territories and the Yukon areas but I knew little and next to nothing of the newest territory of Canada.  On April 1, 1999 Canada officially divided the Northwest Territories, a land claim that had proposed in 1976. This new 'land' has and still is mainly inhabited by the Inuit who have lived there for thousands of years. This new territory was called Nunavut which translates to the 'place of fish' in the traditional Inukitut language.

Garnered with the history of this magnificent new but oldest land, I knew that I had to fashion a new genre, a new type, a new style of faerie so her story could be told through my own imagination of colours, design, look and feel of a faerie made to represent and hopefully do justice to this land that was and is our ancestry.

**The Legend of Sedna the Sea Goddess

The legend of how Sedna became a sea goddess is told throughout the Arctic. The story varies from one region to the next. However, in all versions, a young woman becomes the mother of all sea creatures and controls the availability of seal, walrus, fish, whale, and other sea animals to the Inuit hunters.

Once there was a young woman named Sedna. She lived in the Arctic with her mother and father. She loved her mother and father very much and was very content. Her father was a skilled hunter, so he provided very well for his family. Sedna had plenty of food and warm furs to wear. She liked the comfort of her parent's home and refused to marry. Many Inuit men desired Sedna for a wife and asked her parents for permission to marry her. But Sedna refused them all. Even when her parents insisted it was time for her to marry she refused to follow tradition and obey them.

This continued for quite some time, until one particular Inuk came to visit Sedna. This man promised Sedna that he would provide her with plenty of food to eat and furs for clothes and blankets. Sedna agreed to marry him. After they were man and wife, he took her away to his island. When they were alone on the island, he revealed to her that he was not a man at all, but a bird dressed up as a man! Sedna was furious, but she was trapped and had to make the best of it. He, of course, was not a good hunter and could not provide her with meat and furs. All the birdman could catch was fish. Sedna got very tired of eating fish every day.

They lived together on the island for a time, until Sedna's father decided to come and visit. Upon seeing that his daughter was so unhappy and that her husband had lied to her, he killed the birdman. Sedna and her father got into his kayak and set off for home. The birdman's friends discovered what they had done and wanted to avenge the birdman's death. They flew above the kayak and flapped their wings very hard. The flapping of their wings resulted in a huge storm. The waves crashed over the small kayak making it almost impossible to keep the boat upright.

Sedna's father was so frightened that the storm would fill his kayak with water and that he would drown in the icy waters that he threw Sedna overboard. He thought that this would get the birds to stop flapping their wings, but it did not. Sedna did not want to be left in the water, so she held tightly to the edge of her father's boat and would not let go. Fearing that she would tip him over, the father cut her fingers off, one joint at a time. From each of her finger joints different sea creatures were born. They became fish, seals, walruses, and whales.

Sedna sank to the bottom of the ocean and there became a powerful spirit. Her home is now on the ocean floor. If you have seen her, you know she has the head and torso of a woman and the tail of a fish.

Sedna now controls all of the animals of the sea. The Inuit who rely on these animals want to maintain a good relationship with Sedna, so that she will continue to allow her animals to make themselves available to the hunters. Inuit have certain taboos that they must follow to keep Sedna happy. One of these says that when a seal is killed it must be given a drink of fresh water, not salt water.

If the hunters do not catch anything for a long time, the Shaman will transform himself into a fish. In this new form, he or she will swim down to the bottom of the ocean to appease Sedna the Sea Goddess. The Shaman will comb the tangles out of Sedna's hair and put it into braids. This makes her happy and soothes her anger. Perhaps it is because Sedna lost her fingers that she likes to have her hair combed and braided by someone else. When she is happy, she allows her animals to make themselves available to the hunters. Animals do not mind giving themselves up to provide food, clothes, and shelter for the Inuit. **


I hope you now know why and how I created and welcomed Mistress Sanna amongst the beautiful, mystifying and magical family of the Northern Line of Faeries. I do hope that I have done her justice and I hope that she is able to carry on the folklore of the Inuit people. 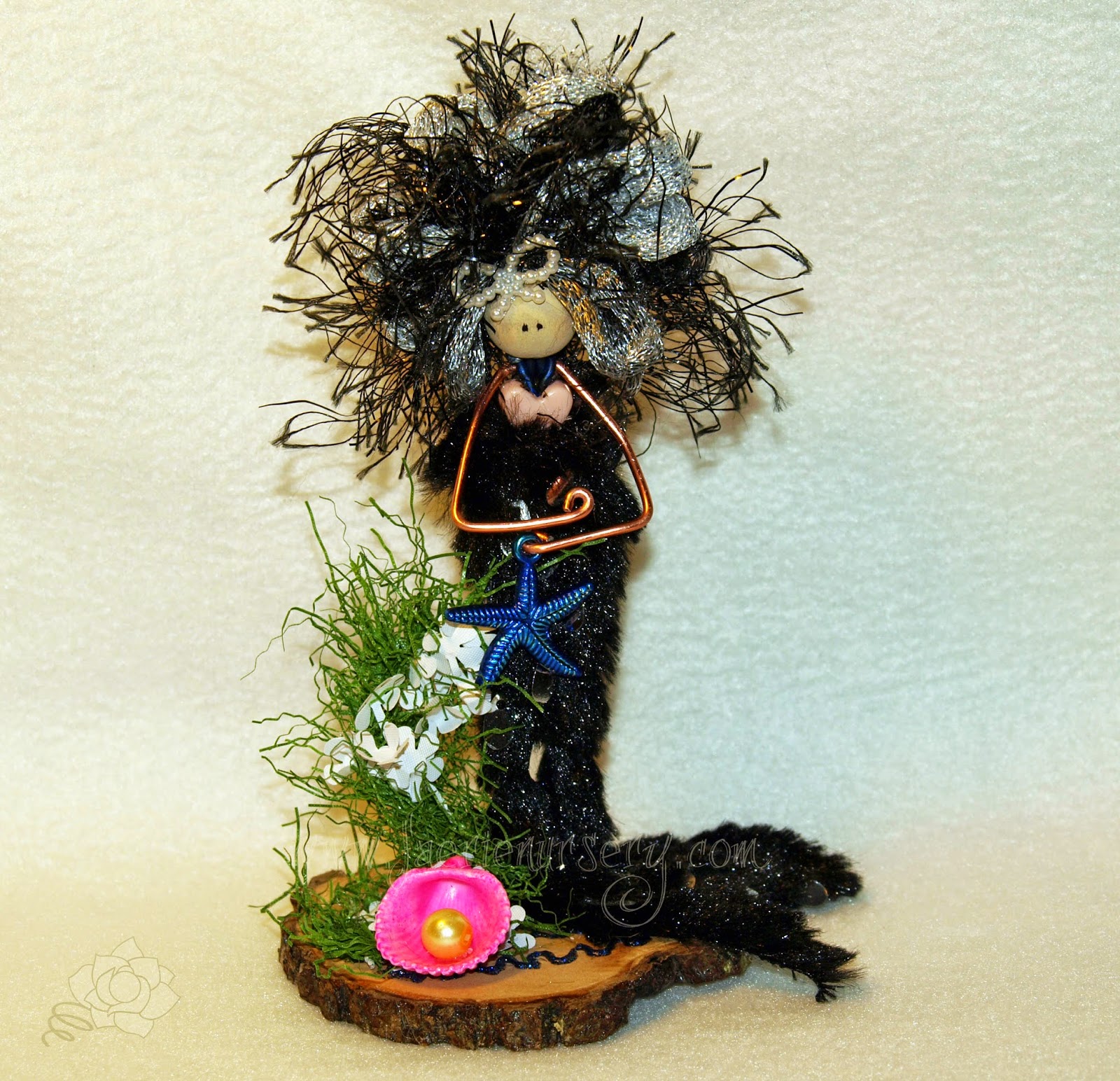