Now as some of you know and some of you don't know this tad bit of information and please do keep it to yourself as the faeries for their own protection do not want this to get out, especially to other faeries but my goodness never, never, never, ever, to a human!

I am not quite sure what transpired so long ago as I have not heard many of the stories, the whispers or even been able to eavesdrop while the faeries are sleepy eyed and singing themselves to sleep with dreams of days gone by. But for sure, for sure...something did happen those many moons ago that brought us and the faeries to such a quiet and shussssh type of relationship. It does seem though that there really are very few of us that can see faeries. Actually be able to listen to the faeries as they sing their songs. And most of all to be able to dance away with them while they play in the flower garden.

So with that all be told....we now hope to remember, to dream, to hope that we may be one of those lucky few....that get to know the faeries.

As we all know there is a whole lot more to that realm that has the thinnest, shimmery and magical veil to it that has all kinds of wonderful things happen on the side that we cannot see. But once in awhile, not very often, but sometimes they like to just peek their toes through and their noses so they can see what all the noise is about on our side.

Back to the original few sentences that this wee story relates to...I seem to be able to get easily distracted from the thought at hand...but then again....I think I am allowed to deviate a bit as with living in a nursery filled with faeries...well who wouldn't be absentminded, bewildered and well be completely stumped, perplexed and well be completely befuddled!

I have learnt (remember to shhhhhhussshhh this part of the story) that the faeries can actually wear the tiniest, of the weeniest, of the whittliest, of the teensy-weensiest, of the itty-bittiness, of the...well okay, you figured out that I was just trying to say that these aren't huge by any means. They wear cameras! Well, actually, I really don't know what they wear or if they are wearing anything at all for that matter. I just know that they are able to somehow share little glimpse of what they see and transfer it to an image that a human can see. Now, I don't know if that means that I am someone special, someone that is lucky, or just someone who stumbled upon, or just someone that yearns so much to be able to see these images or whatever it is called and known throughout the world of Fae!

Now these images can somehow (please do not ask me how, why or what as I truly do not know) be put onto a film that I can transfer into a picture that we, humans, can see them, view them and in most times just be in awe as you can now see what the faeries see!

Today, as the sun was still a wee bit warm in the early afternoon and there was no breeze to be had, mind you there were lots of Boreal Chickadees and the sometimes very pushy Grosbeaks swinging from the seed filled feeders and then on top of all of those birds chirping away that sometimes love to the start to dip and dive while trying to catch one of the faeries, just to play with them or so they say...there was a squirrel hiding in amongst the sunflowers that needed to be watched, and watched very carefully.

So instead of letting them hide within the tall grasses in the bushes where the squirrel could quickly spring to, so I decided I would just let them out to tip toe through the flower garden instead.

Now, all of a sudden I heard a full out flutter of wings and high pitched squeals and giggles...so off I run outside to see what all the commotion was about...but the faeries were just talking way too fast for me to even to try to figure out what on earth they were trying to tell me.

With all of this excitement going on...this is how I learned of their secret...(the one that I mentioned way up close the beginning of this story...but remember you have to shhhhhussssshhhh and not to breathe a word about this)...that they decided it was important enough that I needed to see what they had seen.

I, myself, am at a loss for words, I have no clue how to even process what they showed me, or if I am even allowed to share with even you. After much discussion and trust me...with faeries...it may seem to you and me that this whole conversation was only a few seconds long, but this bit of chatter to a faeries took all afternoon, through tea time, through supper time and then all the way to the darkness of the evening... that they had finally decided that they could/should share what they knew with me!

What they told me, well the best way to describe it....is well just through the pictures that they shared with me...


I could see something but I wasn't quite sure what exactly it was that I was seeing. 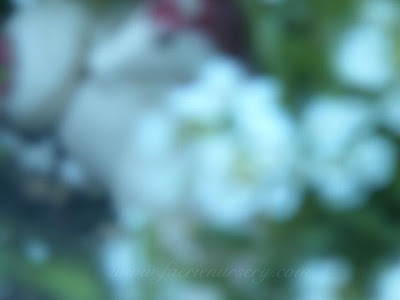 To me, this looked like perhaps we had a visiting stunning and beautiful wee pony. Even with this front view, I was still wondering if I should give my head a shake! 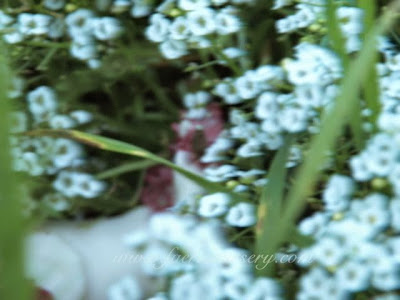 Things are a bit clearer but was I really seeing what I thought I was seeing? 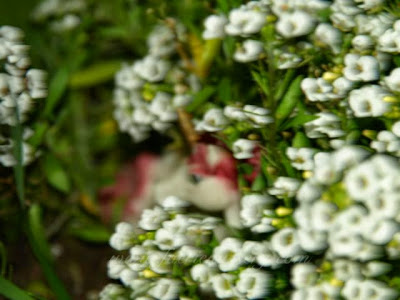 And here she is! In all of her loveliness, grandeur and exquisiteness...
I do believe we have a unicorn here in amongst our nursery! 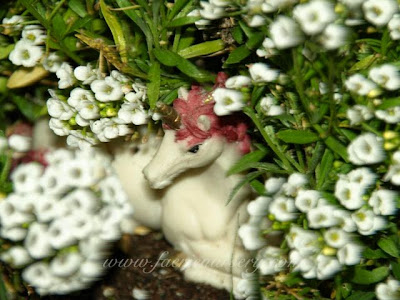 Posted by Faerie Nursery at 12:25 AM No comments: